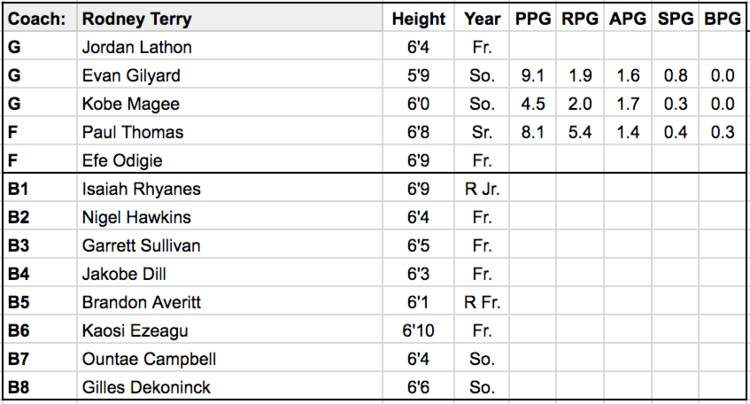 Outlook: The final chapter of the Tim Floyd regime was a runaway ‘mine’ train (see what I did there) that ultimately fell off the rails. After engineering an unthinkable turnaround to save the 2016-17 season – the Miners won 11 of their final 14 contests after stumbling to a 2-13 start – the momentum came to a screeching halt last year. It was Déjà Vu all over again as the Miners opened the season sleep walking, losing all six tilts against D1 opponents – but instead of staying the course in hopes of flipping the switch again, Timmy Floyd decided to hang up the clipboard and called it quits just seven games in to the season. Interim replacement Phil Johnson teased us with a 4-1 record after taking over the reins, but that early success quickly faded into oblivion and the Miners went back into a tailspin for the remainder of the year.

Rodney Terry now returns to his old stomping grounds as the new head honcho tasked with steering the ship back on course in El Paso. Much like so many of the other first year head coaches across the college hoops landscape, Terry has his work cut out for him in year 1 as he tries to lay the groundwork for 2020 and beyond. As many as 8 newcomers will be vying for legitimate playing time, so it’ll be interesting to see how deep Terry goes into his bench.

Of the new additions, none come as highly anticipated as Jordan Lathon, a 4-star recruit from Missouri who has a chance to be the best freshman in the C-USA not named Charles Bassey. Lathon is versatility personified at the guard position – his size and length at the point will give the Miner backcourt somewhat of an inverted look with the 6’4 Lathon at the point of attack next to two compact dynamos in Evan Gilyard (5’10, 155 pounds) and Kobe Magee (6’1, 150 pounds). Gilyard is a blur in the open floor, and Magee is a flamethrower from long range, but both can be erratic at times – Terry will need Lathon to be a savvy decision-maker and fortify what was a relatively inconsistent backcourt last year.

Everything will revolve around this perimeter triumvirate, but don’t snooze on Nigel Hawkins, another highly rated prospect with plus size. So far this offseason, Terry has been very candid about his desire to put the pedal to metal on both sides of the ball. On offense, the Miners will look to keep pace with some of the high-speed transition attacks found around the rest of the league. On defense, look for Terry to try and agitate opposing ball handlers by picking up full court – last season at Fresno, Terry pressed on 20% of all defensive possessions, the 30th highest rate in the country (per Synergy). This is precisely why boosting the backcourt depth with a guy of Hawkins caliber was high on Terry’s priority list, which should keep the guards well rested as the wear and tear of the season drags on.

With so few ‘true’ big men found around the C-USA, Paul Thomas may emerge as one of the league’s top rebounders in 2019. One of the few incumbent veterans who chose to stick around during the coaching change, Thomas was sharpie-d into the starting lineup last season and should retain his rightful spot in the top-5 this year. He’ll get some much needed support up-front with 3-star recruit Efe Odigie and Isaiah Rhyanes from the JUCO talent pool.

Bottom Line: The Miners have a deceptively potent backcourt with Lathon, Gilyard, Magee and Hawkins, all of whom should be salivating to play for Terry this year with his plans to take the offense into overdrive. Gilyard, in particular, should shine in the open floor, while Lathon’s playmaking and vision should create a platter of open looks for the sharpshooting Magee. UTEP will be an entertaining team to watch, but it should take some time for this young backcourt to gel and get acclimated with a whole new philosophy under Terry.

Everybody is sleeping on Eze. We won't know what we have till the season starts, but IMO he is going to turn heads at times with his prowess. He may not be Bassey, but I doubt he will back down.

Having 4 points guards is gonna be exciting. I can't wait to add our 4 other forwards and Boum to the mix.

I say Lathon, McGee, Gilyard, PT and Eze. Odifie and Hawkins off the bench for now.
Reactions: topminer

axingfools1 said:
Everybody is sleeping on Eze. We won't know what we have till the season starts, but IMO he is going to turn heads at times with his prowess. He may not be Bassey, but I doubt he will back down.

Having 4 points guards is gonna be exciting. I can't wait to add our 4 other forwards and Boum to the mix.

I say Lathon, McGee, Gilyard, PT and Eze. Odifie and Hawkins off the bench for now.
Click to expand...

I agree! Can't believe there no mention of Eze. To me that proves the author has no clue of what he's talking about. I also feel that Nigel Hawkeye Hawkins has to be a starter. I doubt Gilyard and Magee are on the floor together. There's too many bigger guards to match up with.
Reactions: axingfools1 and topminer

I hope Hawkins and Lathon have possible Hunter type years.
Reactions: mikesarabia, axingfools1 and topminer
You must log in or register to reply here.