The former Miners legend and member of the 1992 Sweet Sixteen team passed away today. It was reported by David Van Dyke on his FB page. 😞🙏🏻
Reactions: miner1liner, FarWestTexas, utep2step and 3 others
M

I saw that. Any word on why he passed? This is so sad.
Reactions: kickballpro
C

According to my high school classmate, David Dick (he didn't play much, but was on the 92 team). Ralph Davis died of cancer.

I believe that's the 3rd member of the 92 team to leave us too soon (Gym Bice and Roy Howard)
Reactions: miner661, TxRdKiller, develman and 2 others
R

Very sad indeed. Ralph, in my opinion, was a very underrated player. At 6'5" he was very athletic, had a nice shot, and could play D. His early passing is tragic. My thoughts and prayers to his loved ones.
Reactions: miner1liner, Dmanminer, miner661 and 4 others
J

The Bear was able to interchange Davis and Howard for each other and not lose anything off the bench. I guess God has a basketball team.
Reactions: miner1liner, miner661, axingfools1 and 1 other person

Oh damn. My mom is going to be sad because he was one of her favorites and had an autographed photo of him that she cherished.

Condolences to the Davis family and his closest friends.
Reactions: miner1liner, miner661, homeskillet75 and 1 other person 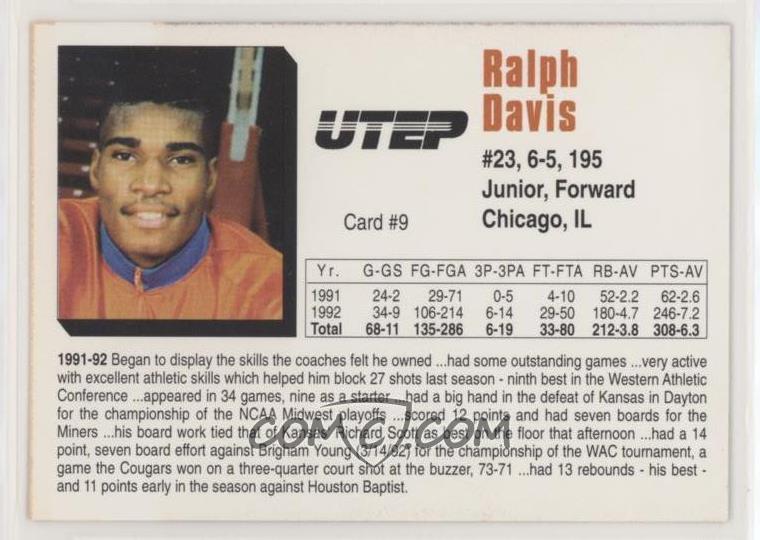 CLASS A STAR IS DISCOVERED​

As a 6-foot-5-inch basketball star on a Class A school in Chicago, Ralph Davis seemingly covered all the angles.
Last season, he proved that he could blend in nicely on a St. Benedict squad loaded with good players. This season, he`s proved to be a dominant player by averaging 21 points, 8 rebounds and 5 assists.
Davis drew additional attention to himself by performing well in two summer camps and competing in high-profile summer leagues. He had numerous schools hotly pursuing him before he covered one more angle last November.
He signed a letter of intent the day before the early deadline to accept a scholarship at Texas-El Paso, where he`ll join a handful of fellow Chicagoans such as Tim Hardaway of Carver and Johnny Melvin of Robeson already contributing to the Miners` cause.

Joe Griffin, an Argo product, is also on the UTEP campus after transferring from Wichita State.
''I`d never been to Texas before visiting there,'' said Davis. ''They treated me really nice. I like the guys I met, and I like their style of ball. I`d seen them on TV a few times.''
''Signing early was a good move,'' said St. Benedict coach Tom Stiglic,
''because it meant Ralph didn`t have to worry this season about anyone
(scouts) in the stands at our games. It meant he could just concentrate on us winning and not worry about any statistics you need at a smaller school like ours.''
Davis had little background in basketball before coming to St. Benedict, which competes in the Chicagoland Prep League and rarely produces Division I players. The Bengals open play in the Class A state tournament Wednesday.
''Ralph used to play all the time at the YMCA at Lincoln and Belmont and decided to come to St. Benedict with a teammate,'' said Stiglic. ''He lives on the West Side, near Pulaski and Madison.''
Texas-El Paso assistant coach Russ Bradburd, a North Park College alum who did his student teaching at St. Benedict, became aware of Davis in his freshman year. Since the school does not compete at the larger Class AA level, most recruiters did not know about him until he started playing well in summer camps after his junior year.
''I never met their assistant coach (Bradburd) until I was a sophomore. We kept in contact, mostly through my coach,'' said Davis. ''Then I started hearing from a lot of places after the camps.''
Davis will be joining one of the most colorful programs in the country. When the school was named Texas Western, coach Don Haskins` Miners won the NCAA tournament in 1966 to interrupt UCLA`s long string of titles.
Bradburd has been giving Texas-El Paso its recruiting presence in Chicago. He attended Von Steuben High School before enrolling at North Park, where he was on the Viking squads that won three consecutive NCAA Division III titles.
''I didn`t play,'' he said. ''My entire college career there, I scored 13 points.''
But Bradburd did become a self-taught, trick ball-handler after spending thousands of hours working out by himself. He put on numerous demonstrations at clinics, which piqued his interest in coaching.
''There`s just a lot of talent in Chicago,'' he said. ''You could go 300 yards in any direction from my home and find dozens of players. We sort of took a gamble on Hardaway, and that`s where it all started for us. Now they`re talking about him being a first-round draft choice.
''Ralph`s a good talent, too. He`s one of the nicest kids I`ve ever met, and if he works as hard as Melvin or Hardaway do for us, he`s got a chance to play a lot next season. He`s such a multidimensional athlete.''
But any contributions Davis makes next year at Texas-El Paso currently are on hold because he obviously hasn`t mastered all the angles in high school-obtuse, acute or otherwise.
He`s had to take a second round of college entrance tests to see if he`ll avoid Proposition 48 status. His shortcoming has been geometry.
Stiglic said Davis may enroll in a special De Paul mathematics program to boost his aptitude if the latest tests prove unsatisfactory. In the meantime, he`s got a counselor.
''I have no doubts in Ralph because he`s such a hard worker,'' said Stiglic. ''This is a kid that rides the bus all day just to get to school. The people at El Paso have indicated they`re behind him all the way, too.
''Ralph`s serious about the education part of school and so are his parents. The moms read a lot about what`s going on today.
''He was really upset at some schools for not even talking about the academic part. I remember he talked to one junior college, looked at their catalog, and was upset because they offered a course in rodeo.''

miner661 said:
The former Miners legend and member of the 1992 Sweet Sixteen team passed away today. It was reported by David Van Dyke on his FB page. 😞🙏🏻
Click to expand...

I'll never forget his jumper in the closing seconds of the Kansas game. I remember looking at my brother and saying "We're really pulling it off!". Rest in peace brother.
Reactions: miner1liner, utep2step, mikesarabia and 5 others
C

According to Ralph Davis' sister's Facebook page, her brother is still with us at this time. I guess the reports were premature.
C

NO!!!!! One of the best miners, ever
Reactions: utep2step

Davis with it. Davis shoots. Why!?! And he hits it. THE MINERS WINNN!! The Miners win!

Epic moment!!
Reactions: develman, mikesarabia, TxRdKiller and 2 others
You must log in or register to reply here.